IEA oil supply forecasts are based on what?

IEA have crude demand over 99mmbpd by year end, vs supply of under 97mmbpd, so roughly a 2mmbpd inventory draw, at least according to the June report, I dont subscribe to see the July report yet.

Most of these types of forecast are based on offshore production flatlining for several years into the future. But it looks like this year you are starting to see production falls vs 2016 in a number of non-OPEC producers, presumably as the capex cuts since 2014 start to have a lagged effect which will last for the next 5+ years. As such going into next year with demand still growing faster than US shale supply, the market will be tightening fast via large daily draws on inventory.

Assuming these reports are accurate there is basically no growth in supply outside of US shale. Is this plausible given the huge capex cut backs since 2014? Of course not, but equally no one seems to know how to forecast offshore production declines as production is very dependent on production management and workover capex.

Seems like this year some countries are seeing YoY declines though. Note how many countries below have range bound production for the last few years, but somehow the IEA forecasts production growth into the end of next year... on what capex? 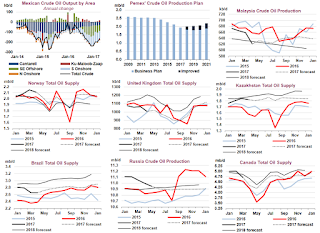 Venezuela is a good leading example of what happens when you cut capex back after a few years of lagged effect: 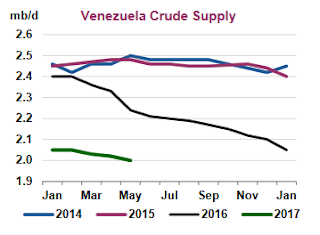 Answer: production can fall 20% in 18 months in this case.

And what happens when supply goes down, demand goes up and elasticity of supply is near zero on a short term basis? Prices rise to the point demand growth is curtailed. In the last 15 years this has been oil prices over $100. This time round I think perhaps $80+ is enough to stimulate more shale supply and faster electrical car adoption, but thats just a hunch.

In the short term however the market is fixated on the idea shale supply is relentless and OPEC has lost control. Any growth scare or other shock could see crude plunge into the $35-40 range and currently it seems to be trading weakly.

Posted by Strategic macro at 07:23