What the heck is happening in oil and what's the outlook?

I commented on oil previously, but decided to look again now its fallen back in price.

So with the advent of shale being ramped up into 2014 and huge offshore and OPEC capex in the preceding 10 years, oil went into a supply surplus in 2014 triggering a brutal and drawnout bear market.

Essentially price was driving a supply/ demand rebalancing; this time from the standpoint of oversupply, as opposed to $80-120 oil prices choking off demand in the 2003-2014 period, ex-GFC.

The market bottomed in the $20s last March and started to rebound as the excess of supply tightened and market participants moved on from the Q1 China growth scare, EM started rebounding and the market looked for a natural rebalancing into this year and 2018.

That rebound trade continued into Q1/Q2 this year. However its been tripped up recently with oil dropping in to the 40s and potentially having more downside in the near term.

What caused this? Demand was weak in the US and EM demand growth disappointed, shale supply continues to build, offshore production has been sticky and OPEC, while reducing production have increased supplies to keep the physical market well supplied while drawing down inventories. The below chart shows the market moving to a slight draw in Q2, this might have happened last year except for the ramp up in US shale production and slowing demand growth.

So coming into Q2 the market started to look at the stability of conventional supply vs the expected ramp up in shale and concluded that the increase in shale was going to keep the market 'lower for longer'. Analysts such as those at Goldman predicted a backwardation in the curve, where OPEC keep prices high in the near term with production cuts and supply management, but the market then looks for excess supply next year as shale continues to grow as part of their lower for longer thesis. In otherwords Goldman suggested their clients buy front end oil and sell forward oil. Needless to say the front end promptly collapsed as physical producers liquidated into that. 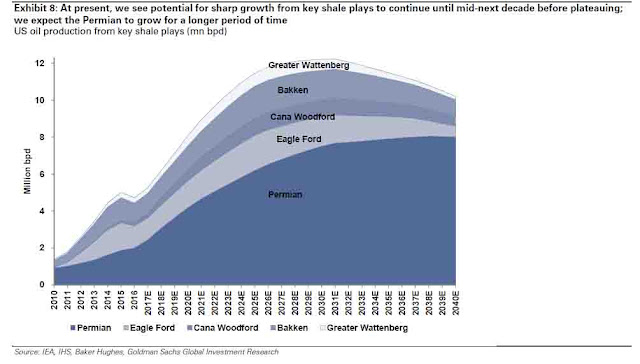 Looking at the charts above, the view being pushed is that growth in shale production will push down medium term prices set against a supposed economic cost for shale at ~$50.

In the short term, the US economic data is coming in fairly weak, inventories are high, supply is going up in shale. Even though the oil market is trading in the high $40's, frankly any sort of growth or demand scare is going to push oil down even further. The CME's economist even suggested $35 was a potential clearing level.

So in the short term the market has sold off and could potentially sell off more on a growth scare. Then medium term, the question is are these sell side medium term assumptions of $50-55 a barrel valid?

I dont have any problem with US shale production growing. The one point I would make is that anecdotally most of the supposed fall in breakevens has been due to the bust in the space and prices for all parts of the supply chain falling. As shale production grows pricing power should come back for people/ wages and suppliers/ capital costs, that should push the marginal cost of shale back up. I have seen suggestions that only 10% in the fall in shale well costs are down to drilling improvements. This might push the cost of the marginal barrel of shale back to the $60-70 price range.

Demand seems to grow at 1-2mmbpd every year, driven by growth and industrialisation in EM, which is partly offset by efficiency improvements in DM and increased use of electrical cars etc, particularly when $80 plus oil drives efficiencies in DM and curtails EM demand. Even if there is a recession in the US, global demand will likely still grow 1mmbpd over the period as neither the US nor Europe are contributing much to demand growth.

So that comes back to OPEC and offshore supply. If demand is growing 1-2mmbpd for the next few years, and shale goes from 5mbpd or so now to ~8mbpd in 2020 that covers 3mbpd of the expected 3-6mbpd in demand growth, add in some OPEC production cut reversals or OPEC growth and there is no real shortage in oil out to 2020 and the oil price should rest at the marginal cost, which for shale swing producers is about $50. i.e. from a short term perspective the upside is capped and the downside is defined by demand risks.

So the medium term trillion dollar question is will offshore production flatline over the next three years, or decline? It has been well supported since 2014 as offshore projects that were 10 years in the making came online and then ramped up production. Clearly offshore capex has seen hundreds of billions of dollars in cutbacks since 2014. So question is what happens to offshore supply? Looking through some interviews and articles, there seems to be few clear views, even forecasts for US shale production vary wildly with the IEA forecasting much less supply growth then Goldman.

As such its difficult to make well supported forecasts for global oil supply, but I can draw a few inferences.

In the chart above, offshore is 30% of global supply. That is on the back of 10 years of capex since the early noughties which delivered a reasonably flat production share, or slightly down from 32% in 2005 to 29% in 2015. Any reduction in capex since 2014 should, ipso facto, lead to falling market share and falling production, at some point.

Proved reserves amongst the larger public listed companies have fallen about 5% a year since 2014, mostly due to production and write downs offsetting ongoing discoveries, while discovery rates have also declined:

Capex has not significantly recovered yet, at least outside of shale and with long lead times both discoveries and new development commissioning should remain low for the time being.

Lets just hypothesise that if reserves are falling 5% a year and capex has been reduced to maintenance and not focussed on new development, then offshore production falls 2.5-5% net per year for several years. Without maintenance and work overs decline rates on older fields can be up to 18% per year in deep water fields that have high initial production rates (and therefore shorter lives and higher decline rates), while in large onshore fields decline rates are often much less. Without having much data on either decline rates or what is scheduled to be brought onstream its difficult to predict how offshore production will develop and as mentioned its hard to find accurate decline rate data or expected supply data.

At the moment the IEA in their 2017 oil market report are forecasting this dynamic only affecting the market in 2020-2022, but it seems to me that if offshore production disappoints it could be a market focus much sooner.

So adding it up we have demand growth of 1-2mbpd for the next three years against a market that is in a slight draw net of existing OPEC production cuts, assuming no big US/ Chinese recession.

We have the potential for up to 1mbpd/ year of shale growth, although other forecasts are less aggressive

So the supply/ demand scenarios based on those estimates is between a 600kbpd and a 2.2mbpd deficit growing each year, per year.

I havent really tried to take into account other onshore production as its a minority of the market and often not high cost like offshore often is.

Overall the market is more than adequately supplied right now, assuming demand growth. However if the US/ China has a recession scare or recession then oil at the front end could fall to $35-40/ barrel, I think, before physical hedgers would stop selling.

However moving into next year or later in 2017, the focus is likely to return to the interplay between declining inventories, OPEC production, shale production, demand growth, and crucially the impact on offshore production in 2018-2020 from the reduced capex since 2014.

With some recovery in wages and costs the marginal cost of shale in my view will go back over $60, which makes a $60-70 range feasible for OPEC next year.

Longer term the evidence was that it took $80-120 to really choke off demand if the market goes into a more meaningful deficit.

So it seems the tightness of the oil market is pushed back for now by weak demand, potential growth scares and ramped up shale production, however after that, the focus will switch back to demand growth vs weak offshore supply.

As an aside, Venezuela with its disastrous management of PDVSA and the broader economy at large is seeing ongoing production falls, and things could get worse before they better, both for PDVSA and the political economy in general, which suggests owning their stressed bonds at this junction a risky proposition even at 50c/$: