I wrote up a note on Lebanon previously when the bond strip was in the 40s and I expected them to fall further but for the actual debt restructuring to not be nearly as bad as the bond prices implied.

Yesterday Reuters reported a 5 year maturity extension, with coupons cut to zero for the extension period, as being tabled by Finance Minister Ghazi Wazni.

However he then denied that it has been 'formally proposed'. But my guess is its in an advanced discussion and Reuters checked the story before running it. 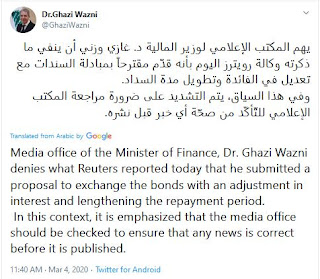 I think this could be a workable reprofiling. If they get donor aid for refugees/ to fund CA deficit and CEDARs money released for infrastructure to kick start the economic rebound.

They did have higher government debt to GDP in the past without defaulting, but for the government to delever you need other parts of the economy to grow/ run a sectoral deficit.

A final peace and recovery in Syria would also help.

It would appear they will pay the bond next week as well, causing the bond to rally. 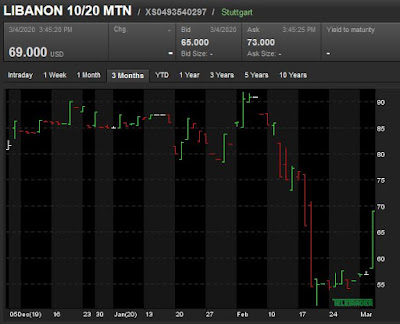 The rest of the strip is still in the high 20s, example below. 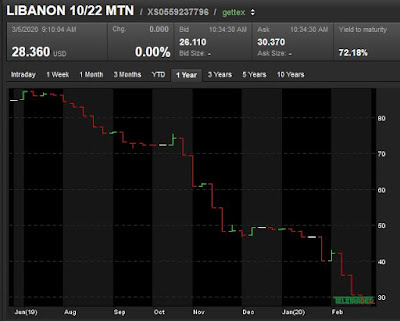 If a deal is going to be agreed based on the Reuters report, then discounting the bonds for 5 years as a zero coupon at a 9% interest rate gives a NPV of 65c. If those bonds in 5 years had say a 5 years to maturity remaining (2030 maturity) with a 6% coupon and an 8% required yield, at that point, they would be trading at 92c in 2025 and the NPV now drops to circa 60c.

So the bonds at 25-30c now are pretty inexpensive. As long as they can agree a deal and then implement the reforms and the economy rebounds. Which are quite a big ask by themselves.

Posted by Strategic macro at 02:46