I had a break from posting, partly due to other commitments and partly as I had similar views as what the market was doing, namely looking for a liquidity fueled recovery.

I did expect a correction in the summer or Autumn, particularly into the Corona re-outbreaks and US election, but in the end the power of stimulus was too much and it was more of a temporary sideways move.

So in a world of ZIRP, QE, unprecedented fiscal deficits, modest curve steepness, sky high asset values, what can derail this?

We hear a lot about inflation and the impending USD collapse, but the USD has risen this year against the majors on the yield differentials.

As we have moved towards a services economy with open goods trade and a fiat monetary system where credit, the financial system and the money supply can grow faster than the real economy for long periods, there has become really two forms of inflation; firstly money supply/ credit/ financial economy growth and secondly skilled wages.

QE and base money creation cause, by the portfolio channel effect, asset price inflation as investors seek higher returns than available in fixed income. To the extent that, with fiscal stimulus, delivers a recovery then broad credit/ M4 growth also happens. So you have credit supply and asset inflation underwritten by QE/ ZIRP/ fiscal stimulus. I think ZIRP/ QE is most relevant for financial assets while fiscal stimulus is most important for the real economy cycle.

As Steve Keen has shown, in a financialised economy, private sector credit going from growth to contraction causes a final demand shock and that can lead to a deeper real economy recession and a credit crisis in the financial economy. So governments have stepped into the Covid crisis with unprecedented fiscal stimulus to support final demand.

This demand support combined with supply chain issues had pushed up commodity prices. However rising or falling commodity prices, while they impact CPI, are really just a relative pricing power shift between goods producers.

So when people predict inflation from QE/ fiscal deficits, is it showing up in credit or the money supply?

The Fed's H8 survey suggests not, while Treasury supply is growing, large parts of private sector credit is contracting and overall bank credit is growing ~6%. So while the inflation has shown up in asset prices, there is no sign of it creating inflation in the real economy. 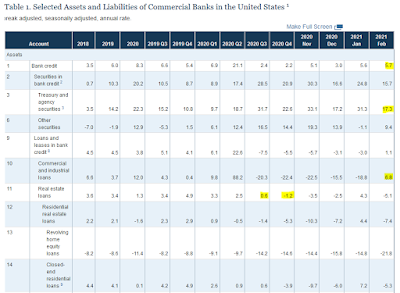 The Fed's recent projections forecast a 6.5% GDP growth this year on a $21Tn Q4-20 economy, while bank credit is growing about 6% on a $15.6Tn banking balance sheet. So bank credit is currently growing at a disinflationary pace vs the economy. Mainly due to private sector deleveraging. I dont think non-bank credit will be doing much differently given the broad deleveraging by private borrowers.

The Fed is expecting YoY inflation numbers to peak in Q2, which is when the difference in commodity prices will be highest and there will likely still be some supply chain disruptions for goods. I agree and also expect inflation to drop back in the second half.

The NY Fed UIG inflation prices only metric is at 2.3% and looks to be rising, while CPI is only 1.7%. If you look, CPI ranges and mean reverts around the red coloured UIG prices measure, so should overtake and overshoot to the upside, maybe 2.5-2.7% in Q2 or early summer. The Atlanta Fed's 1yr forward inflation expectation is rising strongly to 2.4%. 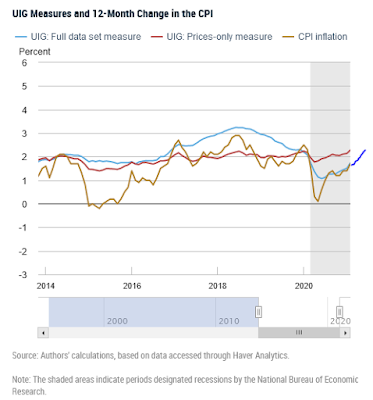 Treasury yields should peak a month or two before all of this, so likely April or May in an upside squeeze.

The recent topping in oil and renewed real estate foreclosures and rising mortgage yields should also soften owner equivalent rent and normalising supply chains should take the edge off goods price inflation. Service inflation has been sticky at a little under 2%.

So I think 1.95-2.05% on the 10yr TSY is a reasonable target. It would give almost 200 bps steepness for the 10yr-2yr TSY spread, which is more or less as high as curve steepness gets in recent initial recovery phases before the spread moves into a range.

After that I would expect some of these inflationary pressures to drop and TSY yields should also drop back to maybe 1.40-1.50% on the 10yr and the weak USD/ commodity reflation/ EM reflation trade should be back on.

However, if monetary inflation is not an issue, perhaps later this year going into next year skilled service wages will be. In most recessions wage inflation has reduced by about 2%: 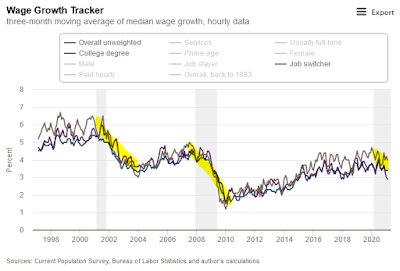 But in this recession it has hardly moved and most of the job losses have been lower skilled jobs. 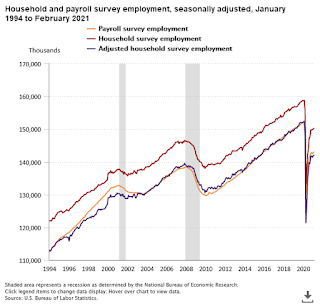 Skilled worker employment is only down 2-3% YoY now while lower skilled it is more like 4-5%. The JOLTs job survey is also showing strong job growth, so over this year a lot of the employment slack should go and we get a tight market for skilled jobs.

In fact the Atlanta Fed's job switcher wage inflation metric which peaked at 4.3% has hardly moved down this time. The last two recessions it dropped 3%. 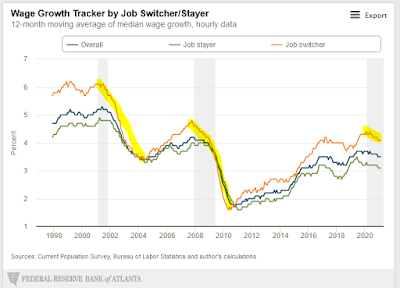 To going into next year if job switcher wages are growing 4.5% or maybe more, the pace of the recovery is slowing, service inflation is picking up, maybe 10yr yields go for 2.5-3% with the market looking for a hiking cycle starting in mid-22.

If this is coinciding with fiscal deficit reduction, while equities are likely to rally as the USD weakens in H2, maybe in 2022 if margins come under pressure, the outlook will be for lower equity valuations.

In the end it will be skilled wage inflation that will force the Fed to hike and tighten financial conditions and this wage pressure leading to hike pressure will only end with a genuine labour market recession.

Posted by Strategic macro at 15:10