How close is Sri Lanka to a debt crisis?

So I got around to reading the IMF's last Article 4 report on Sri Lanka. These are the findings.


Ever since Sri Lanka restructured the Hanbantota port and airport, foreign bond investors have been selling down Sri Lankan bonds.

They have sold about 60% of what they previously own. There is therefore little/ no market at this stage for Sri Lankan govt bonds to foreign investors. 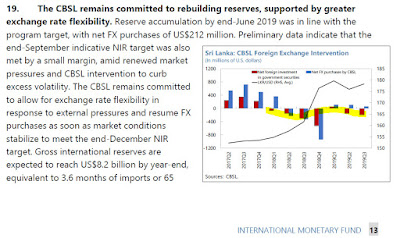 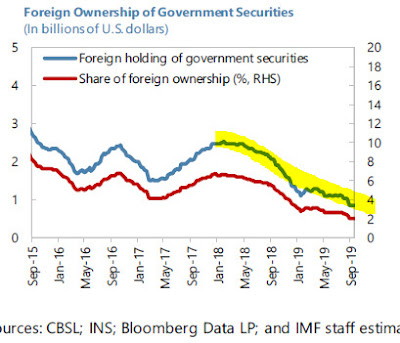 External debt of 64% of GDP and likely to rise, that is at a level where if there is a down turn, then the IMF would impose strict fiscal reforms on Sri Lanka. 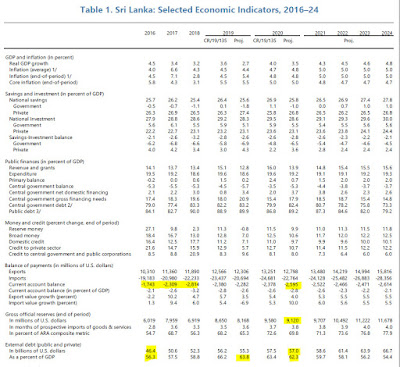 Out of current expenditure of 2.5Tn LKR, 1.6Tn is on interest and subsidies alone. Effectively they are borrowing money to cover transfers, not spending in the economy or investing in capacity. 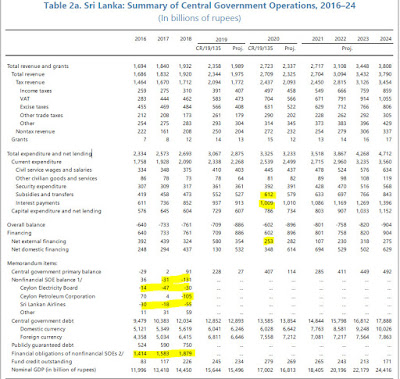 If the oil price falls, which I think it will, remittances from the GCC might slow down and the country is dependent on them. They also are dependent on FDI and issuing $1.3bn in net new foreign bonds. 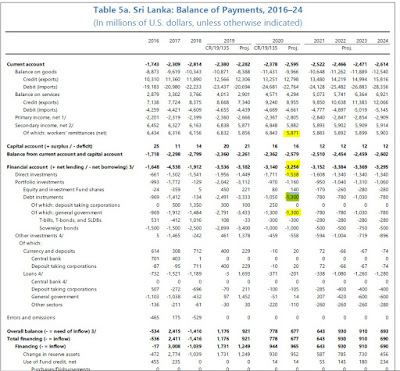 High levels of gross financing as well across several areas. 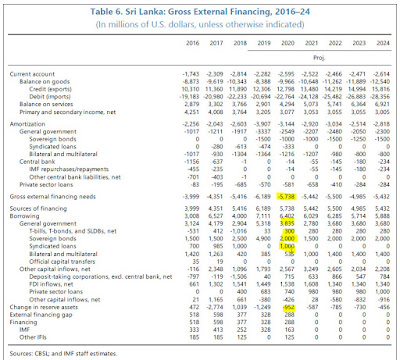 Sri Lanka is a net debtor country. But instead of borrowing from abroad to invest in productive capacity, I think much of the borrowing has been to finance consumption, roll up debt and subsidise loss making SoEs. As such, the more the borrow, the deeper the financial hole they are in. 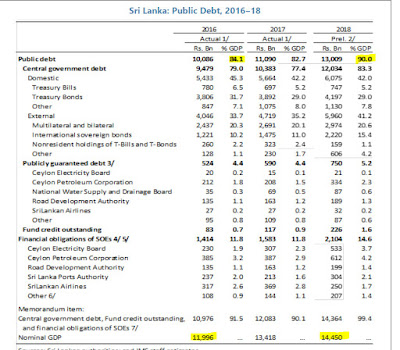 The IMF's DSA assumes Sri Lanka increases its primary surplus by 2.8% to +1.3% when it has averaged -1.5%. That is quite a large consolidation. It also assumes no real FX devaluation and real economic growth goes up to 5%. Is that growth rebound realistic in the face of a large primary balance adjustment?

It would be easier to just cut local interest rates and use macro prudential tools to stop bank credit growth accelerating. 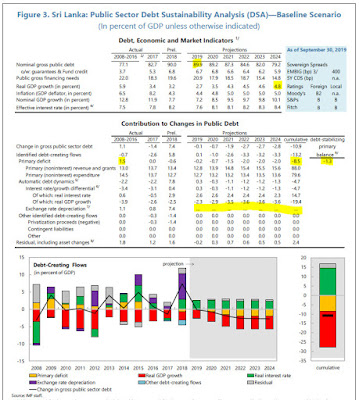 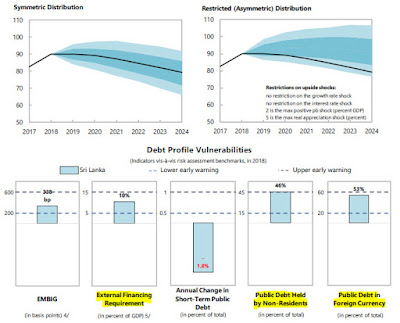 The IMF's 'combined macro shock' scenario is not that much of a shock. It still has positive economic growth and a positive primary balance. A proper recession is likely to look much worse than this however. Their combined shock scenario has debt peaking at 105% of GDP. Way above the level that is sustainable and would effectively mean a debt restructuring would happen. In a typical EM FX crisis it is more likely to see -10% GDP growth. 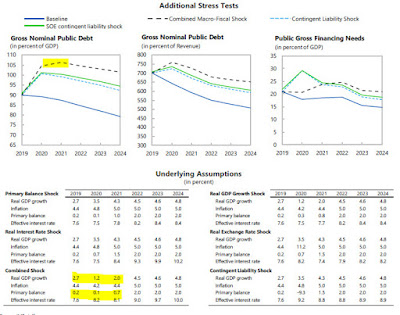 Below is simply a false statement made by the Finance Minister. Sri Lanka's tax level is not out of the ordinary for a country with its level of GDP. Its similar to Egypt for example.

The issue is a large part of the spending in on debt service.

They think the answer is to tax people earning money from their work? Instead you should tax the people who own the debt. The easiest way to do that is cut interest rates and devalue the currency, while encouraging private sector investment and work, not taxing it more.

The SoEs should present a plan to earn a profit and justify their continued public ownership. If they cant do that they should be sold to the private sector. 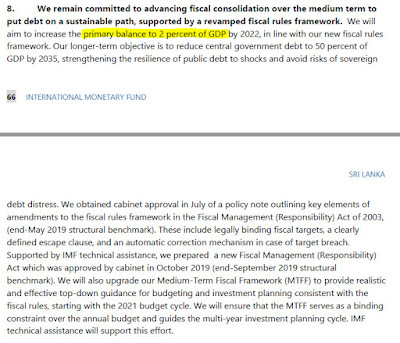 My understanding of this is that a 2% primary surplus is normally not achievable over the medium term for most large countries.

For example, Jamaica as a small country with remittances of over 20% of GDP was able to run a 7% primary surplus.While in Greece, getting to a 1.5% primary surplus caused a depression. 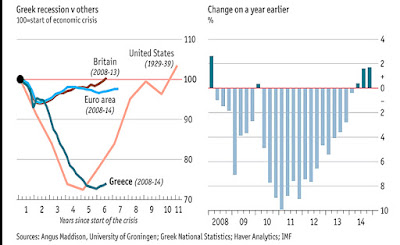 For a small country like Sri Lanka it might be possible but only because a deficit is run elsewhere,  aggregate demand is held up and growth continues.

Basically for it to not slow growth the reduction in demand in the economy from the government needs to be replaced by demand elsewhere. The two easiest ways to achieve that is a devaluation which makes foreign remittances more valuable as a % of GDP, policies that force bond holders when they get repaid to invest their money into the real economy (such as low interest rates) and an improvement in the import/ export mix via higher service exports and more domestic goods production. Another way is to slow spending growth at a rate less than nominal GDP growth, so it rebalanced over time.

Put simply, engaging in a front loaded fiscal consolidation when you already have high debt and a slowed economy, without counterbalancing supply side measures, is likely to fail and lead to higher debt/ GDP later.

So what policies does the government have to rebalance the economy, while maintaining grow, while at the same time the government hikes taxes? If the answer is they don't, then the government's fiscal consolidation will just slow growth and cause them to miss their DST targets. 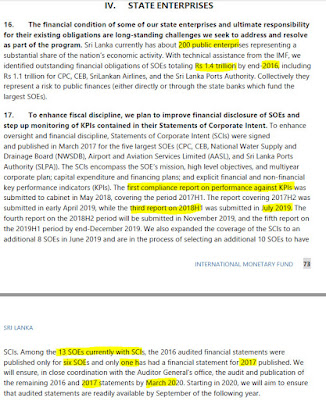 You have to wonder how much shit will be unearthed by making 200 SoEs publish financial statements. It is frankly incredible they have been allowed not to. They should also be investigated for fraud.

While in the long run (10+ yrs) this might be great, opening the doors to Chinese and Indian volume producers versus inefficient Sri Lankan producers might see job losses/ bankruptcies in the short term. Sri Lanka as a tiny economy will always struggle to have volume producers in many goods markets.

The new government's manifesto can be found here. I couldn't see any big ideas in there, just marginal improvements on what is already happening. It reads like it was drawn up be a mid-level staffer. For example, two key sectors, apparel, which is $5bn of exports, got three paragraphs and the IT sector, one page. Even though IT services is one of the areas they have a good chance of growing in. I have pointed out to them, if they want to get to the next level, they need to create globally competitive jobs that pay $15-50k and areas like IT or health care are the two most likely areas.

So in conclusion, I think the country is just a few missteps away from heading towards a debt restructuring and a much tougher IMF programme.

Posted by Strategic macro at 04:56