Outlook for 2020 and onwards

So per my prior post, I see the likelihood of more near term economic weakness in the US and Europe. But assuming no recession or only a shallow one, a recovery in the rest of the year. 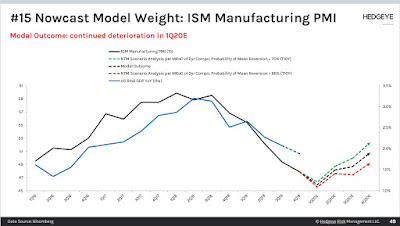 Mid-late 2020
I do think that the US in the mid to late part of the year will recover, whether there is a shallow recession or not. It should do so at a time of:

The Atlanta Fed has job switcher wage growth at over 4% currently, while services inflation is consistently over 3%. 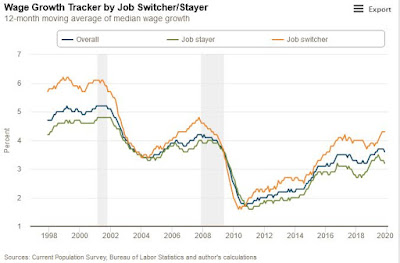 It is more about owning the new cycle’s winners and being short the losers. Good companies that can invest, bring new products to market, raise prices, pay dividends should perform. Zombies, speculative companies, cash flow negative companies and highly valued companies should struggle. Defaults should rise.

Market making strategies and RV strategies should do well as volatility rises to a higher level.
The US Dollar should weaken. The Fed will be gradually forced to hike interest rates again. The Fed may go through several hiking and cutting cycles over this coming decade as it juggles employment, growth and inflation vs high debt levels.

UK & Europe
I think the UK is interesting if they implement Brexit and agree a closely aligned Free Trade in Goods and Services Agreement with the EU.

For the EU, I have seen it as a deflationary crisis risk area, similar to Japan. Indeed in 2019 the Eurozone economic performance has been poor. The Euro has been weak, bond yields collapsed, the ECB had to restart QE, inflation YoY fell from around 2% to 1%, Eurozone GDP growth fell from 3% to 1.2%:

Despite these poor economic outcomes, no economic crisis happened, and QE pushed equities and credit up from the December 2018 lows.

The leadership in Europe has changed. Monetary policy has done everything it can. Now the EU has to redefine itself post-Brexit and for this I think it needs a fiscal pact of some sort, I understand the  ECB under Lagarde’s leadership is pushing for an end to negative interest rates and for a ‘Green New Deal, which will help the auto sector.

If the Eurozone moves towards a pro-growth stance with fiscal reforms, then I think Euro is definitely a buy and there might be interesting stock or distressed opportunities.

But we have to see the fiscal compact, as without it, Europe will just be a low growth, high debt zombie with China product dumping goods it used to export to the US into.

In fact, Chinese low-end product dumping and EU high-end exports being replaced with US exports as part of a US-China trade deal is a key risk for EU goods producers in 2020 and could drive a default cycle and could impact EU manufacturing by as much as 3-5% of annual output.

Asia/ EM
The post-2011 commodity bust adjustment is basically over and China is committed to maintaining growth and reform. A peaking USD and a rising Euro will also be positive for Asia/ EM. Many EM countries are in IMF programmes or have elected reform mandated politicians.
There are 25+ investable countries in public markets and many individual country and company stories.
Overall, I would look for GARP growth names in secular growth sectors or opportunistic investments in niche areas or post-downturns for recoveries.

Outlook conclusion
In conclusion on the outlook, if we get through the next few months and growth starts to rebound later in the year and the USD moves into a structural bear market, it’s a huge market regime change vs the 2013 to 2019 strong Dollar period.

A US growth framework based around wages, inflation and investment really represents a new economic cycle and which is the overall aim of Trump’s policies. Where the US leads, the UK and maybe eventually the EU will follow.