Could the next leg down come as soon as late April or May?

The bulk of the 2008 sell off happened from early September to mid-November, so about 2 1/2 months, followed by a month and a half relief rally and a further sell off in Q1 for about 2 months until the market turned in early March.

This 2020 crash seems to be happening at least 2x as fast. We have had a major sell off and then a partial recovery all inside 5 weeks. So when might the next leg down come? This faster process might put the second sell off in May or even late April with a bit more upside consolidation/ hopium first if the Corona numbers improve as the weather warms and the shut downs work and markets look for better economic data in Q3. I had thought that the 200 day MA at about 3000 could be a target but a 50% retracement would be nearer to 2800 and is perhaps more realistic a target. A second leg down over the course of about a month would take the total fall to about 45% would put the S&P in the mid-1800s by the end of June. This is a similar level of drop to the 2000 and 2008 crises.

However as the reality of a typical corporate recession and retrenchment sets in and as markets write off chances of a Q3 recovery (which seems to be the great hope at the moment, plus Fed buying) then markets should sell off again.

The US economy was almost in recession before Corona and the oil MAD war, which Trump obviously wants to end.

If the recession drags on then there can be more than one relief rally followed by more disappointment. If you own a long term viable SME and need cash, whats the quickest way to get it? Sell investments. The Central Banks are bidding fixed income and some areas of IG credit, but there is no buyer of last resort in risky credit or equities....

The example of the late 60s to early 80s also shows that equities sell off significantly when earnings fall double digits only to rally again as the cycle turns.

Trump possibly implementing a $2Tn infra stimulus later and the cyclical recovery as Corona impact passes, I would hope would see a sustained recovery later in the year, but the Democrat controlled Congress wont want to give too much away before the election.

So to wheel out that Chaucer phrase again: now up, now down, like a bucket in a well. 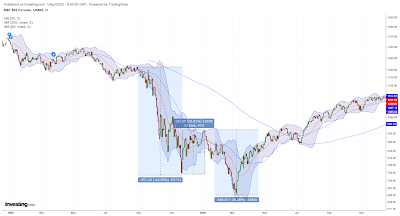 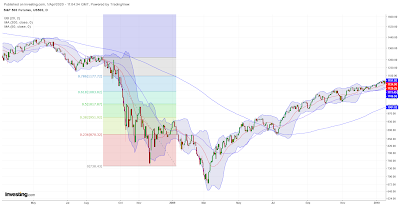 2020 so far: a brutal one month sell off followed by a fairly quick rally: 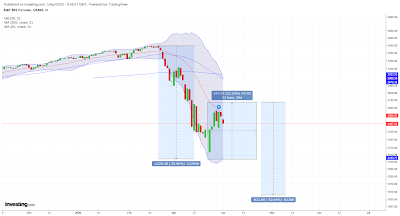 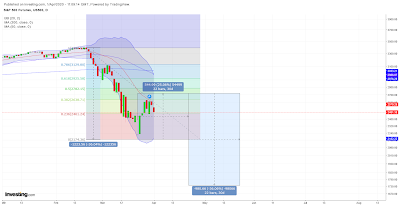 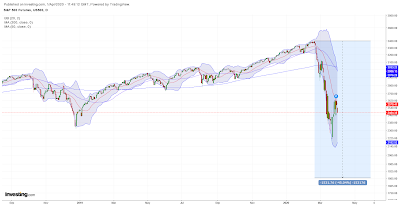 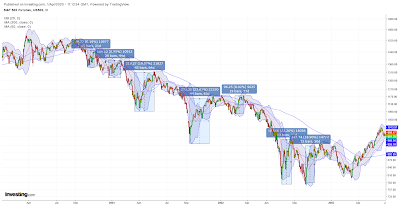 Posted by Strategic macro at 04:26