Reforming the House of Lords

I personally have had enough of the unelected liberals in the upper house. We only have one elected entity in the UK and its the house of Parliament. Not the government, not the PM, nor the house of Lords nor the head of state.

Its all a historical anacronysm.

Instead we could have a 5 yearly elected upper house. Eligible candidates could be those with a Knighthood for public service or similar. We could have 300 or 400 full time Lords elected via regional list. The largest coalition could form the senior leadership and the lead of the house could be formal head of state.

The Windsors can lose all formal power and access to public funds and assets.
Posted by Strategic macro at 02:39 No comments:

The pain in grain falls mostly on the plain?

I have seen some people pushing agriculture as a theme recently, buying farms, thinking its an inflation hedge or something like that. It's the most basic of basic industries, manual labour and energy are two of the main input costs. So without profitable fixed price long term supply contracts to food brand companies or a significant structural cost advantage, such as being the largest producer in a country, its not a very good business.

As this blog makes plain.

As an example, there is a pretty good interview with William Chase about how he went from a bankrupt potato farmer with a commoditised, low margin product to a successful Potato Chip producer with the premium Tyrrells brand.

Prices down 25% in Prime London and activity down 70%

Prices down 25% in Prime London and activity down 70%. Prices are still ridiculous though.

There is a myth of 'all cash' buyers. But having worked in a private bank I can say many prime properties are mortgaged, at least up to a few million, maybe the £5m plus are mostly cash buyers. If you look at CML postcode data mortgage debt in prime areas is up 20-25% in the last 5 years or so, whereas in the West Midlands town I grew up in its actually flat to down despite a lot of houses having been built.

If this guy ends up in No 11 better swap the two up two down in West London for somewhere in the industrial belt. Posted by Strategic macro at 02:40 No comments:

NY Fed's Underlying Inflation Guage that in addition to prices uses other macro factors pushed up to almost 3% in November as CPI prices have bounced this year. I think most people would recognise 3% inflation as being closer to the mark more than 1.5% Core PCE. After all smartphones may get 'hedonically' better each year, but they still cost the same. 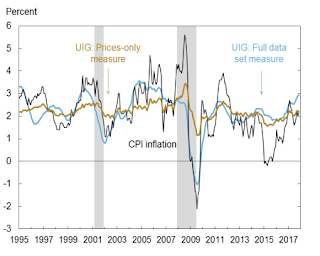 Posted by Strategic macro at 04:35 No comments:

UK October trade stats out. If we are running about £120bn trade deficit, mostly with China and the EU, at a 35% tax rate and say an average manufacturing wage of £35k, that is worth 3.4 million good quality jobs and £42bn of direct taxes. You would also get indirect jobs and taxes from the secondary effects of more domestic activity.

Not that surprising Germany doesnt want to change anything in the EU. When elections/ referedum do force the change, Germany will have a final demand crisis. Even 18 months after the Brexit vote it astounds me that politicians like May dont understand how it happened, while others like Corbyn get it but are forced by New labour MPs to argue for a continuation of the status quo.

A wealthy country with a balanced economy should be running a surplus of a few % of GDP, so the actual delta on a rebalancing would be even bigger than the numbers above.

It will happen as the economy rebalances to higher wages, high investment and saving and higher exports. Continuing negative real rates, tight employment and an infrastructure/ house building programme should push things in the right direction.

That change also represents a massive rebalancing of economic sectors in the UK, and similarly the US.
Posted by Strategic macro at 03:47 No comments:

US transitions almost to oil independence, doesnt need client regimes in the Middle East and then recognises Jerusalem as Israeli Capital.

More generally the US turns towards unilateralism and isolationism and rejects the institutional framework that it set up post-WW2.

Into the vacuum steps China with its belt and road plan; a new superpower emerging for a new century.

All of this fits into the Fourth Turning; political actors, geopolitical developments, various instabilities, the international institutional breakdown. 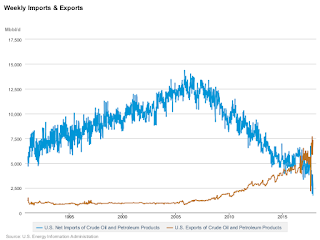 Posted by Strategic macro at 10:46 No comments:

Indian M3 growth has bounced up to 8.8% in the latest release. I think the 2011-2016 consolidation in EM ex-China completed in Q2 last year. The demonetisation drive a year ago pushed back the beginning of a new credit cycle, which is now starting. 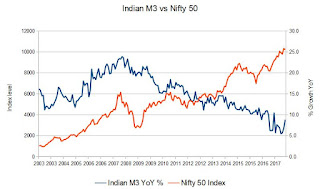 The last real credit cycle India had was pretty much 2003-2008. Starting with the equity markets emerging from a 2000-2003 bear market. During that credit cycle, the equity index more than tripled. In fact, from the bottom to the top it was more like a 6x.

Interst rates in India have been cut significantly below nominal GDP growth, and that loose policy should help start a new credit cycle.

This time around the starting point for equities is following a big post-Modi rally, so less attractive. P/E ratios are relatively high, and P/B value ratios are not super cheap. For example the Nifty index is on about 3.4x P/B value now versus more like 2.1x in Q2-2003. 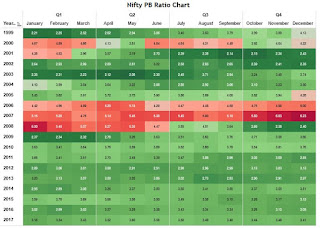 The value instead can be found in private credit (NPLs, distressed and new direct lending) and commercial real estate and infrastructure equity.

Posted by Strategic macro at 08:45 No comments:

I am of the view that the USD could rally next year, for a while, as the Fed attempts to withdraw policy and the economy continues to tick along versus massive global short USD funding.

CNH has tracked the inverse of the USD pretty well for the last few years, so if the USD does rally into next year will be interesting to see if CNH/ CNY resumes the slide. 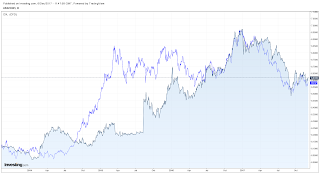 On a REER basis China is pretty expensive and is running large trade deficits with non-US/ EUR trade partners.

As China attempts to pull in the credit cycle, discussed in many other locations, it could drop the FX rate while trying to support nominal wage growth to support final/ aggregate demand and without the inflation it causes hurting competitiveness too much.

That said we are talking maybe 8-10% annualised deval over several years, so hard to make money from the FX forwards, unless they hold back for a few months as the USD rallies and then get forced to make a more abrupt move in perhaps Q2.


Posted by Strategic macro at 03:58 No comments: