If you follow the news then you know what has been happening there, if not this is a cliffs note summary:

The EPRDF coalition political party ruled Ethiopia with an iron rod from 1991 to 2018 with the Tigrayan Peoples' Liberation Front, TPLF, faction being the most powerful. Federal power based along Ethnic/ tribe-based Federal states kept the ethnic/ tribal differences and conflicts subdued. PM Meles Zenawi, and after he died, his successor PM Hailemariam Desalegn, ran the Federal state as a technocratic economic development project and the economy grew about 10% a year for many years.

But the largest ethnic group, the Oromo and the Oromia Liberation Army, felt subdued by the prior Amhara kings and then the EPRDF, which was dominated by the Tigrayans. (Amhara is the second biggest state and created modern day Ethiopia via the prior Abyssinian Empire via the invasion of the surrounding tribes).

Protests and violence came to a head in 2018 and via a parliamentary reshuffle PM Abiy Ahmed, whose parents are both Oromo and Amhara came to power. Abiy was initially greeted as the new face of Africa - a young, reform minded, peace maker. In 2019 he was awarded the Nobel Peace Prize for securing peace with Eritrea.

However, the TPLF did not support him and the EPRDF party split into the TPLF and Abiy's new Prosperity Party.

Anti-corruption drives and other measures were viewed as an Abiy-led purge against the TPLF and things came to a head in late 2020.

Abiy sent 300 special forces to Mek'ele, the Tigrayan capital, who attempted a night time raid on TPLF leaders on the 3rd-4th November 2020. This failed and the TPLF and their paramilitary wing, the TDF, launched a counter attack on the Ethiopian National Defence Forces Northern Command bases on the 4th November.

This led Abiy to declare war on them and initiate a prepared invasion with the ENDF, and he was supported by the Eritrean Defence Forces, Amhara Special Police and crucially drone support from the UAE, who had a drone base in Eritrea, plus a few hundred Somali Army trainees.

As has been documented the UAE drone support destroyed the TDF's heavy weapons and they quickly abandoned a conventional warfare strategy and melted in the mountains. Bringing retired military commanders out of retirement, most notably General Tsadkan Gebretensae, they then trained over 100k volunteers, while carrying out hit and run attacks on the invading forces.

The invading forces adopted pretty much a scorched earth policy and all sides have been accused of numerous war crimes.

The first turn in favour of the TDF was in February the UAE was forced by the US to disengage, which left the ENDF without much aircover.

Then at some point in May the Eritrean troops stopped engaging fully in the new attacks. This left the ENDF exposed to concentrated TDF attacks. The ENDF mounted two failed efforts to take the highlands and lost thousands of troops in the process. The TDF had also been building troop numbers and launched Operation Alua, which led to the total collapse of the ENDF in Central and Southern Tigray and the recapture of Mek'ele, the state capital. Eritrean troops withdrew to the northern border areas.

The TDF then invaded part of the barren Afar region, to the east of Tigray, threatening to capture the Main Supply Route from Djibouti to Addis, but this turned out later to be diversionary and instead the main forces invaded the Amhara region heading towards Debark in the north west and Weldiya in the east.

After capturing Weldiya the TDF have headed south towards Dessie and west towards Debre Tabor, which has been captured this week. Debark, which sits by a mountainous ridge line, has been so far defended by the Amhara forces.

This month they have also agreed to cooperate with the Oromo Liberation Front's Oromo Liberation Army to bring down Abiy. The TPLF and OLF were arch enemies in the past, so this is a remarkable redrawing of alliances.

Over the last few months the OLA has grown from a small force into one fielding divisional sized forces and they have been capturing land north west and to the south of Addis.

Wikipedia and Ethiopia Map on Twitter are keeping up to date maps of territory held and lost. 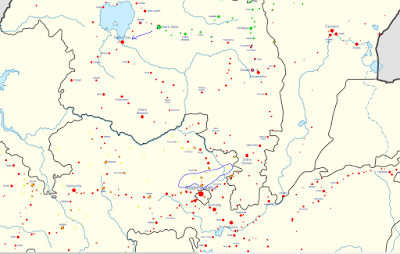 This week the OLA claim they have control of the road down to the Kenyan border and have attacked Suluta, just 12kms outside of Addis to the north. 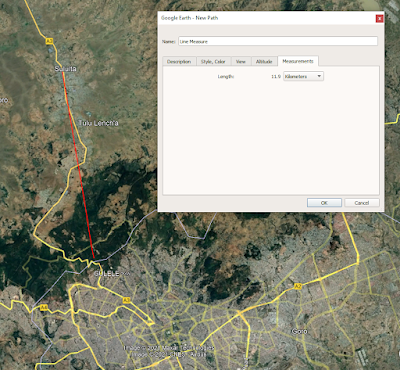 Simultaneously the TDF are now marching towards Bahir Dar, the Amhara regional capital.

Abiy's regime has gotten to such a desperate state that they seem to have accepted sanctioned military drones from the Iranians and have been asking the Turks for additional military support, but it is likely too little, too late.

So in summary, I think we can see that the Abiy regime is a few key battles away from collapsing and the siege of Addis is now beginning.

Which brings us to the bond. 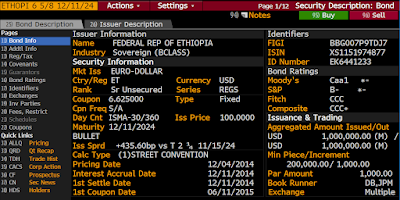 Ethiopia to get to 10% GDP growth ran up 60% debt to GDP, ran CA deficits/ borrowed from abroad and has taken part in the DSSI programme.

Multi-billion projects like the $5bn GERD dam cost a lot of money upfront for years before generating anything yet are key to economic development, for example.
In January 2020 they entered an IMF Extended Credit Facility programme. The IMF expected them to slow growth, reduce current account and government deficits, lower debt/ GDP, engage in economic reforms and build reserves.
They were then hit with the Covid pandemic and took part in the DSSI initiative to reprofile $1.2bn of bilateral debt servicing cash flows.
They have since announced an intention to reprofile debts on a 'voluntary basis' and have so far indicated that this would not include the Eurobond.
Excluding the Eurobond goes against the G20's 'Common Framework', which calls for all debts to be treated equally.
The biggest holder of the Eurobond, according to Bloomberg's analysis of 13F filings is Franklin Templeton fund manager, Dr. Michael Hasenstab, who shall we say is not unfamiliar with sovereign stress and distress. 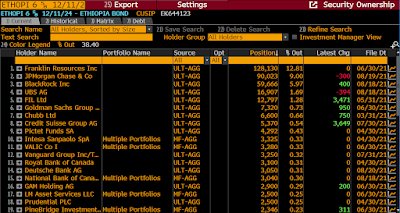 He held a baseline position of $70-90m at least since 2015. It is hard to criticise that, he was supporting a growing, low-income country, with what was initially taken as a new reform minded Prime Minister, Nobel Peace price winner, Abiy Ahmed.
However in Q1 when the bond prices sold off into the low 90s, he bought more and took his holding up to $130m of par value in total. The main portfolio holding the bond seems to be the Templeton Emerging Markets Bond fund.

According to the fund holdings he took it to a 2% position there.
I am not sure what the Franklin Templeton ESG policy is, but he did this while Ethiopia was financially stressed, asking for debt relief, in an IMF programme and additionally when there were numerous reports of widespread war crimes being committed by Abiy's combined forces in Tigray.
The bonds are currently indicated in the high-80's, but hardly trade.
Default and Restructuring
The IMF would typically want a low income country to peak at 60% debt to GDP, net of an IMF programme, yet Ethiopia went into the last 18 months at that level of debt/ GDP.
In my opinion, the country will end up with a restructuring and a meaningful NPV debt haircut.

In my opinion the Eurobond will be included in the debt restructuring. If the new government is quickly recognised by the US and IMF then perhaps a 65c recovery at an 11% exit yield may be achieved by the end of next year. However the bonds should trade significantly below that before and after the restructuring as the negative news hits, perhaps they trade down to 30-40c.

If the US/ IMF don't recognise the new government then it becomes a hard default against a possibly sanctioned regime, if that happens, then sub-10c will eventually be realised.

I do think the former outcome is much more likely but the bonds could easily trade under 30c amidst the initial uncertainty and the time frame for normalisation can draw out easily. Post restructuring bonds are often trading at 15-20% yields for at least 6-12 months in many recent instances before cross over investors start to buy back in and yields normalise.

So on a $130m of par, a $100m mark to market loss is not inconceivable with maybe $40-50m in permanent losses, post restructuring, over the medium term.
Complicating factors could be the expected secession of Tigray, which would cost Ethiopia 7-8% of GDP. Tigray could also claim war reparations at least against the Amhara state, which represents about 25% of GDP.

There is also the likelihood that the TDF will go after Eritrea's totalitarian dictator Isias Afwerki and invade Eritrea. Whether that results in a new democratic, independent Eritrea, a merged Tigray/ Eritrea which delivers a defacto secession quickly, or Eritrea is again assumed into Ethiopia, that remains to be seen. I think it is inconceivable that the TDF will make the mistake of leaving Afwerki in power again as it did in 2000 when the Army was ordered to stand down by PM Zenawi.

Posted by Strategic macro at 07:41 No comments: