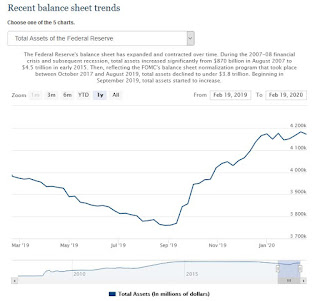 Posted by Strategic macro at 08:51 No comments:

US moves to a net oil export position

US oil production has ground higher and products supplied slipped in the last few months & the US has moved to now a fairly consistent (small so far) net oil exporter. Demand in the US is essentially flat for 20 years now.

Question is who can the US take export market share off over the next few years?

Iran and Vene have already been 'whacked' and if anything Vene's production will climb from here.

If there is no obvious new sanctions candidate, it will have to be delivered by low market prices or OPEC voluntarily surrendering production share.

With Permian marginal producers being long run viable in the $50s range, GCC will have to fiscally consolidate over the next few years. 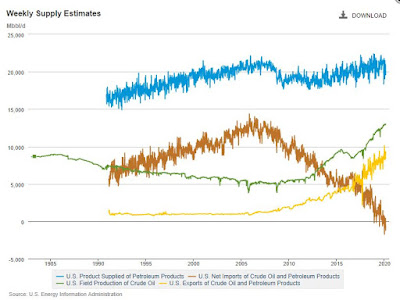 Posted by Strategic macro at 08:05 No comments:

According to this chart from Bain's 2020 LBO study, there seems to be about 2.5-3x as many LBO deal entries than exits in this cycle? 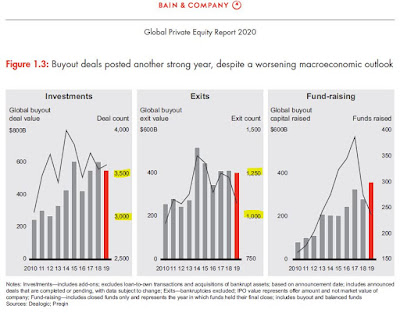 While the exit value of the sucessful deals seems to be about double what was invested, the question also arises of what happened to the other deals that haven't been exited after 5-10 years?

Bain found that out of the successfully exited deals, 71% failed to meet the margin improvement targeted when the deal was entered into - and this has been during an economic recovery period and only covering exited deals. 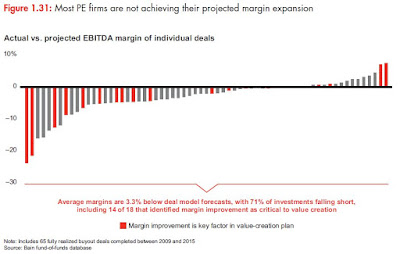 If after 5-10 years, only about 40% of deals are being exited and most of them were behind target, what has happened to the others? After all, this cycle has been the longest and most accommodating ever for US corporates.

Meanwhile, in terms of the current market environment and outlook, we know that with record amounts of capital being raised from LP's, the last two years' US LBO's have been done at all time record valuations. 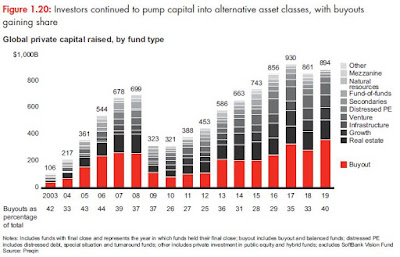 According to S&P, 2018 and 2019 have seen average US LBO multiples of over 11x EBITDA (which means that half of all deals were done above 11x), with Europe only slightly behind. 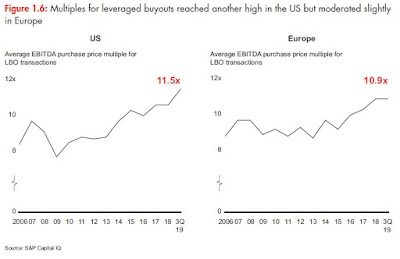 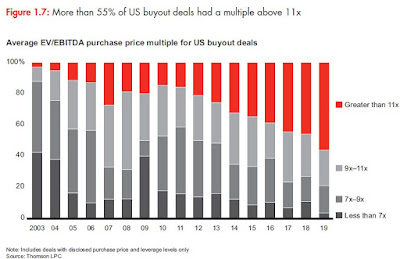 According to Bain, 10-year returns of US LBO's have been similar to the S&P index return, despite LBO companies being small to mid-cap in size and highly leveraged.

This suggests there is no wholesale inefficiency in the LBO's and, in fact, the LBO sector is probably overcapitalized. 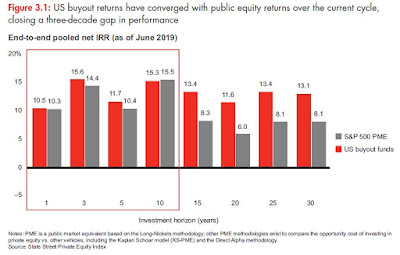 The sources of return on exited deals also don't suggest any great value add by the GP's and instead highlight the dependency on margin levels and multiples. 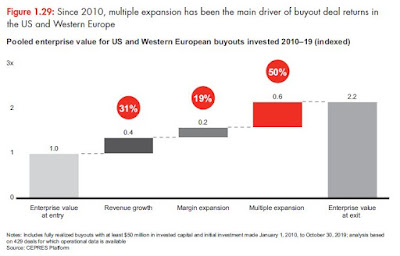 Additionally, if only about 40% of the older deals are realized, it might raise questions on what valuations are being used on the remaining (struggling?) deals, to generate these stated IRR's.

We know the best vintages are done at 8-9x depressed EBITDA following a downturn, not at >11x on falling, late cycle EBITDA.

To finance these record multiples, the GP's have arranged deals with ~5.5x EBITDA from senior loans (aka leveraged loans) and the balance, another ~5.5x, from equity. 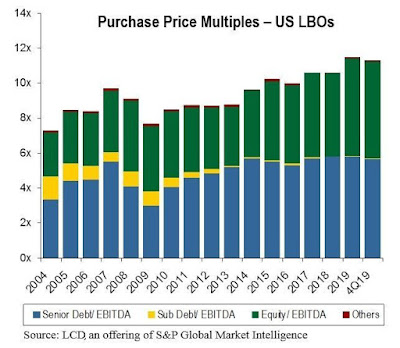 So these LBO financing structures and return outlooks are underpinned by a combination of corporate margins and valuation multiples. But unfortunately US margins are in the process of falling, as they always do late cycle, until there is a recession.

EDITDA is not as sensitive as after tax profits, but lets assume a 41% profit drop equates to roughly a 30% EBITDA drop for an average LBO company.

Let's assume a recent LBO with $1 of EBITDA was done at $11 enterprise value, financed with a $5.50 senior loan and $5.50 of equity. Then after a downturn the loan market is only willing to finance LBOs at 8.5x EBITDA.

So you would assume this would breach loan covenants and the deal would be toast?

But here is where it gets more interesting. LBO GP's are judged, in part, on how many deals go to zero. So if a company's business has not blown up and the issue is more the amount of debt/ EBITDA, then the GP's have an huge incentive to keep a bad deal alive.

Over 5-10 years, as nominal GDP grows, most companies should see substantial revenue and therefore EBITDA growth, so by keeping a bad deal alive, even if it involves drip feeding more equity in after a downturn, it keeps management fees coming to the GP, a positive carry option for the GP on a recovery and avoids difficult conversations with LPs, but all at the cost of the fund IRR and liquidity to the LP.

Once an LP commits to a new private equity fund, during the investment period they pretty much can't get out of the capital calls and then they are dependent on when the GP chooses to exit investments, years later.

So to abridge the famous song;

...You can check out any time you like,
But you can never leave!'

Posted by Strategic macro at 05:50 No comments: 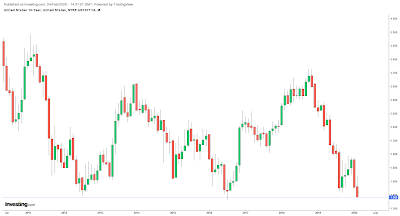 I think the environment echoes the late 60s and 70s where the Fed was forced to go through several hiking and cutting cycles to try and balance growth, employment and inflation.

The bond market is clearly saying cut 2-3 times. Fed funds is pricing about 1% EFFR by the end of the year now. 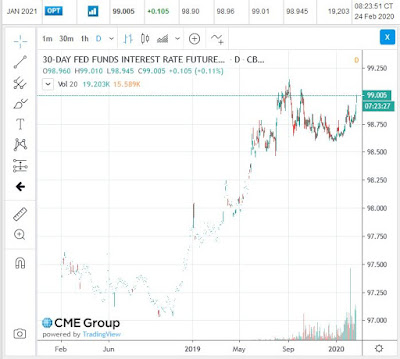 The 60s and 70s show the outlook for equities is very dependent on the path of profits. A 5-10% fall in profits would be treated badly, while resilient profits or a rebound should be welcomed by investors.
Posted by Strategic macro at 06:38 No comments:

Was the economic bounce since October just a dream?

Was the risk rally/ supposed economic bounce since October all a dream? 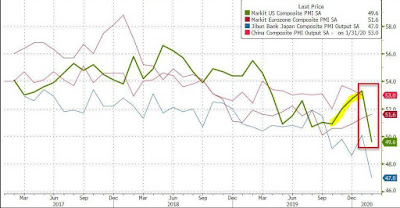 ...while the rising continuing claims, falling C&I loans, weakening corp margins, rising inventory liquidation, private sector contribution to Q4 GDP of almost zero, reinverting bond curve this year, they all told the real story, which is that the US is nearly in a recession

Despite 1.5% rates and a $1Tn plus fiscal deficit We are 5 weeks from the start of Q2, which would be about when a conspiracy theorist would expect the Fed to dump the equity market in order to hurt Trump's reelection campaign/ economic credibility.

Posted by Strategic macro at 01:21 No comments: 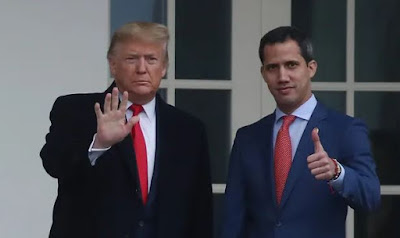 Posted by Strategic macro at 04:55 No comments: