The FIRE economy under Trumponomics 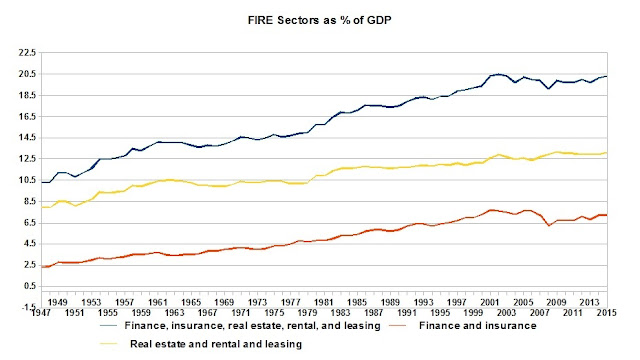 Will a US rate hiking cycle be the final nail in the coffin for large areas of finance?


Finance as a % of GDP is at an all time high and the tide is about to start going out. While there will be big losers, there will also be massive winners and new businesses built on the changing environment.

As shown in the chart above, the so called FIRE sectors have grown from under 15% of US GDP in the 1970s to around 20% now. The sector has flat-lined since the early 2000's as perhaps debt growth has been offset by lower interest rates.

Its clearly a sector that can shrink as a % of GDP as Trump wage inflation pushes up wages as a percent of GDP and defaults rise, set against still continuing negative real Fed rates and nominal GDP rising faster than debt creation at some point.

In the short term though as debt is growing about 3x faster than GDP, perhaps some rate hikes will even increase the FIRE sector's share of GDP before the structural reversal sets in.