QE has leaked everywhere, mostly into assets. With Japanese, Chinese and European QE it leaked across borders. But the the spiot is being reduced. I think Fed tightening has not been felt so far, at least in part, as the other major blocs were still easing.

In fact US financial conditions have loosened as yields have fallen: 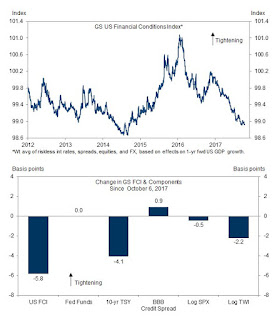 Which brings US to the latest statement of intent by President Xi:

"housing is for living rather than speculation"

This could not be a clearer signal to get away from the assets that Chinese credit leakage has pumped up. Most notably prime real estate.

Some people are unaware of just how much money has leaked out. But Hong Kong prime commercial real estate yields 1-1.5% to give an example of the impact at the margin a tidal wave of capital has. The bear market Hong Kong experienced last time it went through a proper tightening cycle was brutal.

The thing about porosity, is the flow can go in both directions.

Posted by Strategic macro at 03:52