Corbyn plots a Marxist revolution; could he win the election by accident?

I don't think Corbyn can win outright. However, with the constituency system of 650 MPs and votes split often three or four ways in each constituency, he could get in via a coalition with the SNP or LibDems. He is currently only 41 MPs behind the Tories. With a Lab/ LibDem/ SNP coalition he only really needs 270-280 seats vs 247 now: 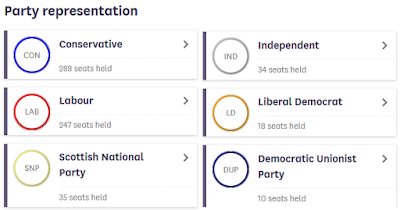 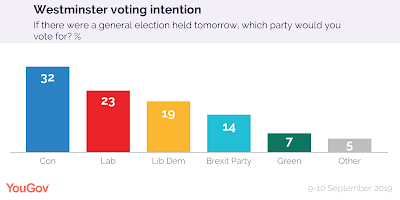 
Farage does not believe the Tory Party will exit the EU by itself, or at least will only exit via the Withdrawal Agreement which leaves the UK closely tied to EU rules, taxes and regulations. If Farage does campaign against them, he risks splitting the leave vote in Tory marginals. This would boost both the Lib Dems and Labour numbers in Parliament. Its unlikely the Brexit Party could cause many Labour marginals to become Tory seats.

The speech can be taken as a trial balloon for the manifesto in the coming election.

In the short term 'free money for all' policies boost the economy via upfront spending, but medium term it will be a disaster, as centralised state socialism always is.

My understanding of Marxism is as follows; the proletariat rise up and overthrow the 'bourgeois' capital owners and bring about a revolutionary socialist system. Marx predicted this is most likely to happen when the capitalist economy is in crisis. In other words; socialism is born out of capitalist failure and crisis.

I think its fair to say capitalism has been in the Third Turning since 2008 (in fact I think the Third Turning was 1997-2016), The Unravelling, whereby policy has aimed to continue the prior framework (credit super cycle supporting final demand in the face of large imbalances, global platform company labour arbitrage, concentration of assets and profits and falling wage shares to GDP).

Strauss-Howe predict that in the Fourth Turning reformist leaders emerge (which I see as happening since 2016), who break down the prior institutional framework and implement a new one, during which time there is a chaotic environment. Clearly our reformists are Boris Johnson and Jeremy Corbyn.

Viewed from this perspective, of Marxist theory in a time of struggle and reform, Corbyn's speech tells you he sees himself as that revolutionary socialist leader and he intends to lead that revolution now.

Below are a summary of his key speech policies:

He described the economy as 'a tool in the hands of policy makers'
He will scrap the Trade Union laws and nationalise rail, national electricity grid, water and mail.

'Using compulsory licensing to secure generic versions of patented medicines. We’ll tell the drugs companies that if they want public research funding then they’ll have to make their drugs affordable for all. And we will create a new publicly owned generic drugs manufacturer to supply cheaper medicines to our NHS'

'Free education for everyone throughout life as a right not a privilege. No more university tuition fees. Free childcare and a new Sure Start programme. Free vocational and technical education. And free training for adults.'

He will give the workforce a 10% stake in large companies, paying a dividend of up to £500 a year to every employee. He will increase the minimum wage by almost 20%.
He wants to tax the top 5% and big companies.

UK industrial output is about £500bn a year, or 25% of GDP. He announced he would spend an unbelievable 25% of GDP, or 5% of annual GDP if spread over 5 years, on two large scale sets of new spending programmes. Corbyn is a Unions & QUANGO workers wet dream.

He will spend £250bn (£50bn a year/ 10% of UK annual industrial output if spread over 5 years) on energy, transport and broadband infrastructure.
He will spend £250bn on 'capital for businesses and co-ops'
With £500bn without doubt you can solve some problems, but if that is low RoE or negative RoE and crowds out private sector investment it will just lead to less economic growth in the long run. Its also likely to be a massive union boondoggle and very beneficial to party and union connected businesses.

It might also be a bigger fiscal boost for German goods producers than anything the German government will agree to.


Who will pay for this?


We already have a near record trade deficit and need to rebalance that via a careful strategy of higher wages, higher savings, higher investment, more domestic production and more exports and less imports. I have argued the case before for a private sector, investment led, economic boom after Brexit.

Corbyn simply sees the problems and plans to spend enormous amounts of money, but he cant know where the money will come from to pay for it. The external sector has been willing to finance UK deficits for some time as the economy rebounded and grew and while the UK represented a liberal safehaven. For a while it will also probably finance Corbyn given his policies are pro-cyclical and will offer higher returns/ yields for a period. However, longer term, given the high tax, stagflationary policies, it seems very unlikely the external sector will pay; so crowding out the domestic private sector is the only possible alternative. This is the stuff FX crisis are made of, but only a few years down the line.

The first five years could see a significant boost to GDP, maybe longer, but later on the negative effects will show more prominence, probably when there is a recession.

Two details were outlined however, those were that he will build large scale solar plants, battery hubs and wind farms and he will also ramp public house building. All of this is great for well connected, high-wage, unionised companies and QUANGOs.


He will withdraw from US/ NATO military interventions in favour of diplomacy.

He would then be relatively free to implement his policies; he has no intention of reducing taxes or regulation (and therefore maintain the level playing field requirements) and having left the EU would not be as bound by EU state subsidy rules in his nationalisation and 'investment' programme.


Corbyn was never meant to be leader, after a career as a campaigner, he lucked into the role due to failure by mainstream career politicians. In the last several years he has been forced to become an expedient politician. His reformist agenda is also popular with the party grassroots.

Question is can he now luck into No. 10?

The Guardian has a good summary of his conference speech statements:

Posted by Strategic macro at 11:52