Wiki has a short summary of how the 1929 crash unfolded. 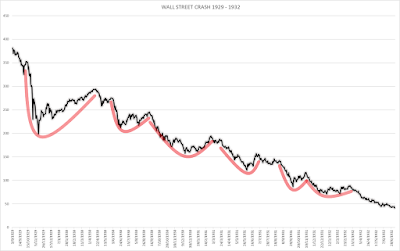 
After the initial selling took the Dow from around 380 down to just below 200 it then rallied from mid November 1929 to mid April 1930, about a 50% rally, recovering about half of the loss.

It then staged multiple further sell offs until 1933 as the credit cycle contracted and the recession deepened, but each one saw a rally after that revovered around half of the loss.

You can also see the equivalent of the Plunge Protection Team trying to prop the market up at the start.

Liaquat Ahamed's excellent Lords of Finance book does a great job describing the precursors to the crash - the Treaty of Versailles and the destabilisation of the gold standard that led to the roaring 20s and subsequent bust.

Yet what have we witnessed since 2008 except new Lords of Finance? Only these ones have a printing press while in 1929 the local money supply was determined by gold availability.
Posted by Strategic macro at 09:37