What's the sub-prime of this cycle?

The next leg down, which I assume starts late this month or in May... we should see what floats to the surface in terms of big, realised, end of cycle losses. 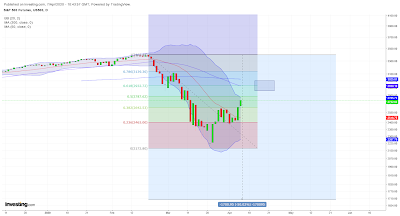 I think the next leg down will be driven by a mix of the corp cycle and leveraged xccy carry holders of IG fixed income being stopped out. Primarily I think Japanese and EU banks and insurers. That is the real weak link, the sub-prime of this cycle; large quantities of overpriced assets held by weak holders. Some of the assets they own lost 10-12 years of carry in points loss in March before many of these areas started to rebound. But I think they will resell off again in the next sell off.

As the market sells off and these investors start to stop out, it will force people holding BBB, HY or Equity to sell as well.
So Raoul Pal's USD wrecking ball view, while somewhat true for Emerging Markets facing a trade shock combined with USD liabilities, isn't quite that for Developed Markets. In DM it is instead the Eur and Yen rallying as QE leakage is stopped out and repatriated and the wrecking balls smashes asset markets downwards from the top. Remember the banks and insurers are typically 10-20x leveraged to their own equity.


So what QE giveth, QT taketh away and it never seemed to do all that much for the real economy anyway.
As Chaucer said, 'now up, now down, like a bucket in the well.'

Posted by Strategic macro at 09:50