Fed has primed the markets for the next pump and dump

After going through 2008 there are a handful on instances or statements that stick in my mind.
If you recall the problems started late 2006 and by Oct-Dec 2007 the Fed had to bail out the banks with year-end funding.
Then in Jan 2008 markets fell about 15% intra-month. I remember a strategist at HSBC said; 'by year end no one will remember this'.
He was right markets rallied for 5 months and by year end no one remembered what happened in January!
I think now is analagous to that. The US economy was on the brink of a recession anyway, equities were totally oblivious to this, but the bond market was on it. Then the Corona disruption should deliver a technical recession and markets have tanked.
The Fed etc have responded and I think markets should rally into the summer, and they will rally enough to force most investors to participate in them. But I think it will be a narrow rally, led by the prior leaders.
The $10Tn question then is, as oil capex contracts roll off in Q3 & the US economy sees an investment shock, is that enough to drive the US into a proper recession into the election?
My base case right now would be yes and that will be the real liquidation event. What has just happened is only the amuse bouche and is no where near a real liquidation cycle. 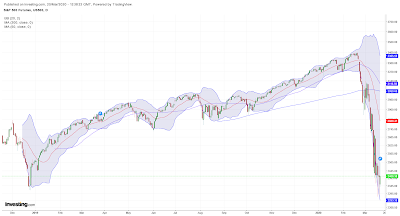 If it starts to move there, career risk reappears for long onlies missing out.

But there is no pull to par in equities.

To paraphrase Chaucer: 'Now up, now down, like bucket in a well.'
Posted by Strategic macro at 05:47