Are we approaching a market meltdown driven by the curve inversion?

I had previously said I think 10yr US Treasury yields could bottom in April at 75-85bps. Well six days later we are below that range... risk happens fast I guess.

I think the Fed needs to flatten or steepen the curve to stop Jap and EU banks selling to primary dealers and crushing liquidity. So if they actually understand what they are doing they should do an emergency 75bps. Until then we have liquidation, same as what was happening in October. But if they do cut, it could turn the tables quite quickly.

This chart shows the repatriation of capital back to Yen when the curve inverts. EU and Japanese banks have lent about $4Tn in this cycle via QE leakage to the US government, hence USD weakness and EUR and JPY strength on risk off/ curve inversion. 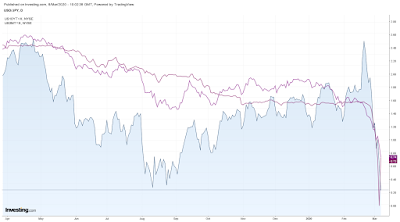 If the Fed cuts to 30bps or so EFFR it will mean the curve is steep and we start to see the capital come back out of Japan and EU. But will they do 75bps in an emergency meeting next week? Or wait for the FOMC on the 18th or just do 50bps? Who knows.

The S&P on the other hand looks to me like it could punch below 2800 without hitting too much technical resistance if there is no emergency meeting. 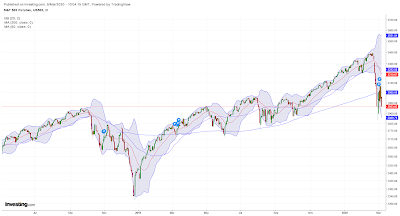 However, later this month I think the 'Corona virus is going exponential' fears should subside.
And I do think there is a second half economic rebound.

So perhaps this slowdown and market clear out will be the pause that refreshes?
Posted by Strategic macro at 02:15