Update on the 'Yen Plaza Accord'/ liquidation event trade


One of my core, end of cycle, meltdown views has been the Yen rallying massively, similar to the Plaza Accord, as QE leakage gets rapidly repatriated in a liquidation event. Currently the US curve inversion is driving that repatriation (if you are going to borrow $4Tn from foreign banks, you should probably make sure it is positive carry for them).


The Yen/ Won pair in the last two global meltdowns doubled and its starting to move again now.

I think that the pair is currently saying this is just the shaky beginnings of something much bigger, later. Ie it is the prelude of what might happen, say next year or later this year. The start of my chart's 100% move is September 2018, so just before the Q4 2018 meltdown, but also that shows it has taken 18 months since then to get to where we are now, with a more pronounced breakout/ liquidation event. Perhaps the current liquidation event should have been in October 2019 (had the Fed not re-started not-QE). 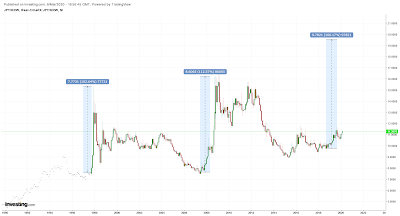 Looking at 2008, which was also a slow moving car crash, starting late 2006 with sub-prime/ adjustable rate mortgages; from March to August 2008 it went into a consolidation pattern until the real liquidation event happened.

Then when it really did start to move, it didn't stop.

So we are seeing the initial move now, and if the Fed cuts to 25-50bps this month, that might put markets into a pause until later this year, before a likely relapse, driven in my view by compressing corporate profits in the US.

JPY/ CNY is also an interesting long term chart, but the CNY is much more substantial a currency than Korea, an exporter of cyclical goods. 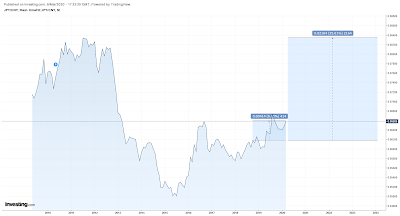 Posted by Strategic macro at 09:26